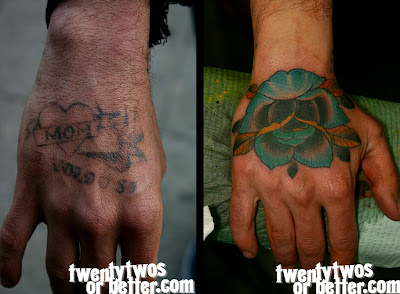 Scott has two of my favorite tattoos, the Ride Hard or Die skull and the L.A. skyline envelope (both on this blog in earlier posts). After a few sessions of laser he asked about covering up what was left. Since everything was half removed we could do this rose on his hand no problem. I'm always a bit leary of laser removal, but without it this tattoo would've been a nightmare to do.
file under: Cover-Up, Tattoos Links to this post
Email ThisBlogThis!Share to TwitterShare to FacebookShare to Pinterest

I don't get a lot of healed pictures; often I never see the wearer again, and the rest of the time it's just me being lazy. I saw this torch all healed up the other day and decided to grab a picture, mostly because the fresh one I took was terrible. I managed to grab a picture of ths K-I-L-L-E-R homemade tattoo as well, it's one of my all-time favorites. 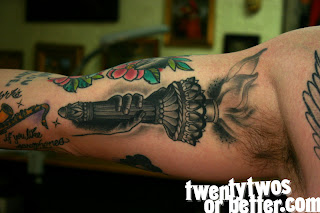 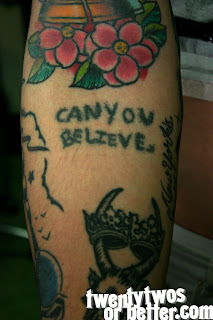 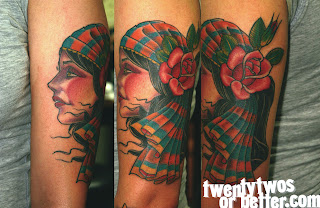 I posted a picture around christmas of this gypsy head I started. I did a bunch of tattoos on Annette over the last year or two, but she's living in Boston now so it was a few months before we could get to the color. Giving tattoos a little time to heal and settle before moving on the color is actually ideal, but not always possible.
file under: Tattoos Links to this post
Email ThisBlogThis!Share to TwitterShare to FacebookShare to Pinterest

Well, it turns out they're at the tattoo shop. Who knew?
Links to this post
Email ThisBlogThis!Share to TwitterShare to FacebookShare to Pinterest

If you can ever time travel...

INCOGNITO TATTOO
Pasadena, CA
1993-2011
I came out to Incognito Tattoo just before Thanksgiving 2007, just to cover some shifts for Spencer. I did a few tattoos, and I got to watch Adrian and Adam do a handful of tattoos as well. I can back out in the Spring, Jason Schroder offered me a spot, and shortly after that I made the move to Pasadena.
Beyond the basic idea of how to do a tattoo from start to finish and street shop work ethic, the majority of what I've learned about tattooing I learned at the Pasadena shop. Over the almost three years I spent there I worked with some great tattooers, machine builders and just overall great people. The time I spent at 750 E. Colorado Blvd. changed the way I looked at not just tattoos, but drawing, composition, color theory, technique, machine theory, and pretty much everything I previously thought I knew about tattooing. Without the tattooers (and customers) I worked with at Incognito I wouldn't be where I am now. I know for Jason this is a welcome change, but for me at least (and probably a few other people as well), it's sad the see the doors close at the old Incognito. I met some good friends in that building, and had the opportunity to work on some great projects as well. I was only around for 3 of the 18+ years Incognito was open, but I'll still miss it.
Thanks to everyone I had the chance to work with that was nice enough to show me a thing or two about a thing or two, wether it was for just a few days or almost 3 years.
Spencer Briggs
Adrian Sanchez
Tim Forbus
Shawn Barber
Mike Collins
Sagent
Zach Johnson
Henry Lewis
Mason Williams
Deno
Lynn Akura
Jeff Zuck
Adam Forman 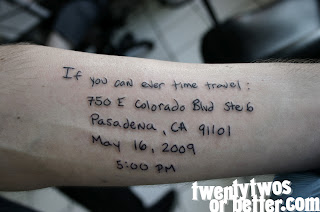